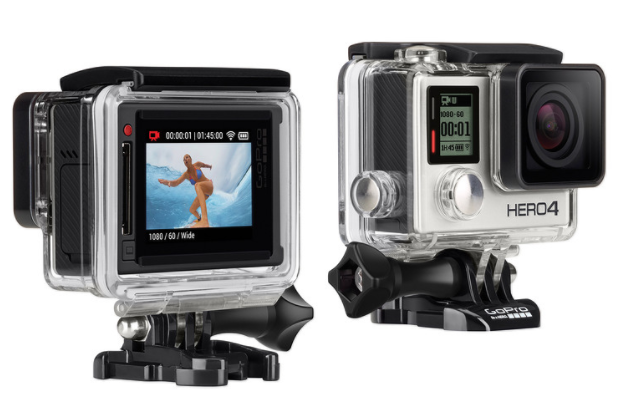 May 17, 2017September 26, 2017 hubtechinfoLeave a Comment on So which one to choose for motovlogging-GoPro Hero 4 Silver vs Xiaomi Y14K

Are you into motovlogging or want to make a mark in motovlogging? Then you must take a closer look at these amazing action cameras. You guys might be confused what’s the difference between cameras and action cameras, right? Guys basically action cameras are cameras with which sports or any action can be recorded while performing it in the same time e.g. Sports like BASE jumping, Wing flying, Moto blogging and others action sequences.

Widely used nowadays by the Moto vloggers for recording everything for their work. Moto vloggers are the people who record views or actions of themselves as well as the experience they are going through and put it on the internet for people to explore.

Some of the brand manufacturers of action cameras are GoPro, Xiaomi,Polaroid, Sony HDR, Toshiba, Garmin etc the most leading is GoPro hero4 silver at this time and a good rival of it nowadays is The new arrived Xiaomi Yi 4K.

So guys today I am going to help you in choosing the best action camera between GOPRO HERO 4 SILVER and the ravishing new XIAOMI YI 4K.

For a long time GoPro has been in the top of the list and the other companies are also trying hard to get there. The list has been baffled up after the arrival of Xiaomi Yi 4K, this camera is a stronger version of the previous models and it can be easily seen from the elevated price.

A few days back I myself evaluated the Xiaomi Yi 4K and what fascinated me the most was the video quality. The other features like technical specification are also amazing so I felt the urge to finally compare the topper in the list GoPro and the newly arrived Xiaomi. I really had to compare between these two amazing action cameras and make out which one would I buy. So let’s get started. 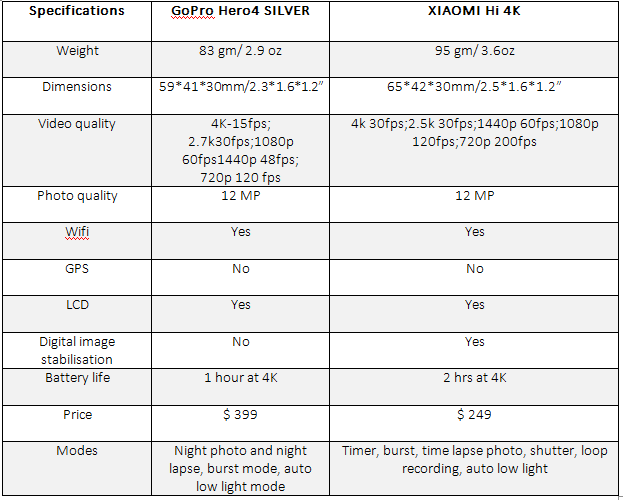 So I mentioned all the specifications of the camera above, let’s now discuss all of them quickly. If we look at the design and dimensions, both the cameras are kind of same. The newly arrived Xiaomi Yi 4K is a bit bigger in size than the GoPro and a bit heavier too.

It also has 3 options if we have to choose for colours: black, white and pink. It has got just one button on the surface of the camera for power/record and all the other functions are operated from the LCD touch screen.

GoPro Hero4 silver has got a lot of buttons in the surface, it gives buttons for wifi, power, recording and settings and also these functions can be performed with the help of the LCD touch screen too.

There is one point that I would give as a bonus to GoPro and that would be how perfect for me the camera feels, it gives a feeling that yes it’s been made from all the good stuff. It gives more of a professional look to me maybe because of Xiaomi’s modern look that makes me like GoPro much more.

Design matters a lot but not more than specifications right guys? Now if I look for the specifications I would give that point to Xiaomi Yi considering its video resolution and frame rates. The GoPro is able to record at 15fps 1080p 60fps in 4K where as Xiaomi records in 4K at 30 fps and 1080p 120fps. Well there are other resolutions also, we can easily see that in the specifications table but I think these two come in use more than any other else, maybe because I use these two more. 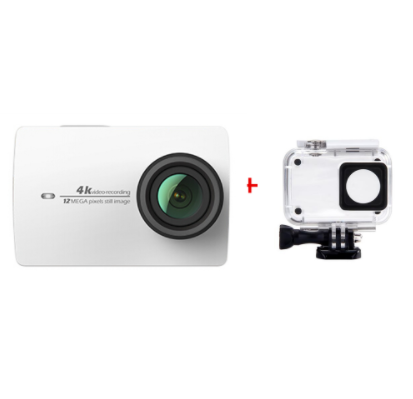 The difference in frame rates and 4K is quite intriguing. As we see the difference in video quality one has 120fps and 60 fps, but I really wonder how that actually makes a difference, the only difference that might be there would be that if you’re willing to make a slow motion video then 120fps is going to enhance the quality surely.

One more point of differentiation in both cameras would be that Xiaomi Yi consists digital image stabilisation resulting in smoother videos than GoPro, but digital image stabilisation at 4K. I know you might be waiting to know about the battery life so guys here it is GoPro has had the problem of battery life for very long, GoPro can continuously  shoot a 1 hour for 4K videos where as Xiaomi 4K shoots for 2 hours continuously.

So for me guys all these amazing specifications in just $ 249 is unbelievable. After comparing the both in terms of technical specifications I have to give thumbs up to XIAOMI YI 4K.

So here we have a sheer comparison of the image quality of the cameras. We can clearly see Xiaomi has the better clarity and colour quality in the picture as well as the brightness is too good. Both the cameras are good and natural but my vote is for Xiaomi Yi 4K as the digital image stabilisation system is too good and moreover the pictures are sharp and clear. And getting all this in $249 is the main catch.

One of the best things about these latest technologies is that these are compact in size and very soon you will see action cameras based on Virtual Reality. Yes, you heard that right, just wait and watch as there will be a lot many surprises coming your way in future.

So after reviewing every minor detail it has become really tough to tell which the best one is as both are rock stars in their own way. So I would say if you are interested in a less expensive unique action camera then you guys must choose Xiaomi Yi 4K. it has everything installed for you guys but if you are looking for a more rougher and good designed expensive camera with all the features fascinating you then u must go for GoPro hero4 silver.

For me if I had the money I would have bought both of them seriously, the designer looks of GoPro and the deadly combination of efficiency and less cost of Xiaomi Yi 4K really attracts me a lot. If we see the price quotient, Xiaomi providing every technical specification in an amazing price of $ 249 and is $ 150 lesser than its competitor GoPro is a big victory.

So if you are planning to make a mark in the field of motovlogging then you must give any of these action cameras a sincere try.